LPG is a mature, but quite niche alternative fuel that can be used in special spark ignition engines or as an auxiliary fuel in dual fuel compression ignition engines together with diesel oil. LPG is a mixture of propane and butane and it is a by-product of gas and oil industries. The use of LPG in transportation is concentrated in few countries (Korea, Turkey, Russia, and Poland) and it is mainly used in bi-fuel light duty vehicles.

Regulated emissions are dependent on the vehicle type (OEM or retrofit, bi-fuel or dedicated, injection type, age etc.), but with proper designing, somewhat better emission performance can be achieved in modern vehicles compared to gasoline. Compared to diesel, lower NOx and particulate matter emissions can be obtained, whereas CO and HC emissions are typically higher with LPG (similar to gasoline). Compared to natural gas, emission performance is worse, but distribution and storage are easier.

Liquefied petroleum gas (LPG) – also known as autogas – is a widely used alternative fuel. LPG is a mixture of propane and butane, and it is being produced as by-product of natural gas and oil refining industry. Around 60% of total amount of LPG produced is recovered directly from oil and gas fields (WLPGA) in which case no actual refining is needed. The remaining 40% is formed as a by-product in crude oil processing either in distillation phase or after-treatment (cracking) processes.

In 2010, LPG was used to power more than 17 million vehicles around the world. Little more than 9% of the global consumption of LPG is used in transportation. (WLPGA). Rest of the LPG is used, for example, in space and water heating, cooking, electricity production and in many industrial processes. The use of autogas is concentrated in a small number of markets: Korea, Turkey, Russia, Poland and Italy accounted for half of world consumption in 2010 and the top ten countries for 75 %. In Korea and Japan, most of the LPG is used in taxis and other light-duty fleet vehicles due to incentives and regulations. In Europe LPG is mostly used in the private sector, in cars which typically have been retrofitted with LPG equipment as opposed to Korea where LPG vehicles are original equipment manufactured (OEM). LPG is not used much in heavy-duty vehicles. (WLPGA). The increasing trend in autogas use can be seen from Figure 1. 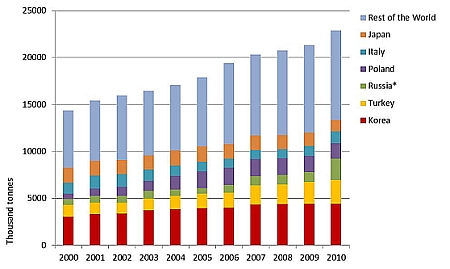 LPG consists mostly of propane (C3H8) and butane (C4H10) which can be easily liquefied at moderate pressure. Table 1 lists the basic fuel properties of LPG (as propane/butane). The chemical composition of LPG varies depending on the location and time of the year. For example, LPG sold in the Netherlands contains on average 60% propane and 40% butane, but in northern regions such as Canada, USA or Sweden, LPG consists mostly of propane. At low temperatures, vapor pressure of butane is so low that it will not come out of the tank. LPG used in transportation should contain as little olefins (such as propene) as possible. Olefins have a low octane number and they are known to cause carbon deposits in engines.

ISO has two standards for Petroleum products LPG, but these are mainly meant for international trade and not specifically for vehicle use (ISO 8216-3 and ISO 9162). The ASTM 1835 standard for Liquefied Petroleum Gases covers four basic types of LPG for use in applications such as domestic and industrial heating and as engine fuels. The CEN standard EN 589 "Automotive Fuels – LPG – Requirements and test methods" covers the use of LPG as vehicle fuel. There are also other standards for automotive LPG. (Rehnlund 2008). The selected requirements for LPG according to EN 589 standard are listed in Table 1. 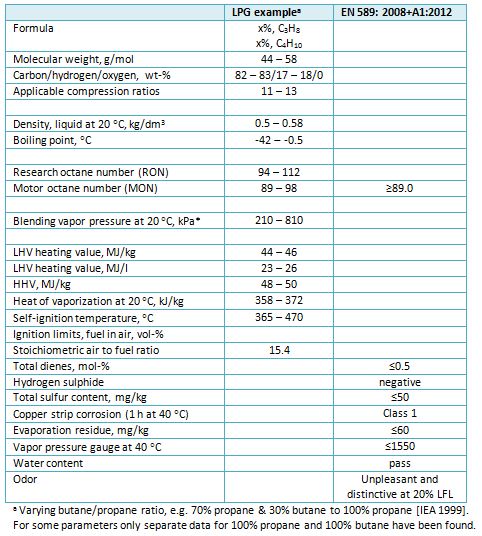 Similar to natural gas, LPG forms easily a homogenous mixture with air. This combined with the relatively simple chemical structure of LPG, it burns cleanly and is well-suited for spark-ignition engines. For compression ignition (diesel) engines, LPG is not suitable as the sole fuel.

LPG vehicles are available as OEM vehicles and as retrofit vehicles. Generally OEM vehicles perform better than retrofit vehicles. LPG is used mostly in bi-fuel vehicles, which start on gasoline. Spark ignition engines using gasoline can be converted to LPG or bi-fuel engines quite easily by changing the fuel system or adding a parallel fuel system for LPG. Liquid or gaseous LPG is sequentially injected in the inlet ports of an engine. The LPG-kit can be implemented in nearly all petrol cars. The advanced LPG vehicles have lambda control, which enables good catalyst performance. (Verbeek et al. 2008).

In spark ignition engines, similar compression ratios are typically used with LPG as with gasoline, even though the octane number of LPG (112 for propane, 94 for butane) is higher than that of gasoline. This is due to the fact that the combustion temperature is higher when LPG is used and this lowers the knock limit especially at high engine loads. Exceptions to this are the engines in which LPG is injected in liquid form. In bi-fuel cars, the upper limit for compression ratio is restricted by gasoline. Efficiency of LPG engines is similar to gasoline engines.

When diesel engines, typically used in buses and trucks, are converted to LPG use, spark-ignition must be added. In addition, compression ratio must be reduced, combustion chamber must be reshaped and, of course, the whole fuel system must be replaced. It is, however, also possible to use LPG in diesel engines as an auxiliary fuel similar to methane. In so called gas-diesels, diesel is needed as ignition fuel and gas can be the main fuel. Gas-diesel engines work on the diesel process and energy efficiency is good. Dual fuel gas-diesel is more complicated and more difficult to control on transient operation than spark ignited gas engines.

A major difference between conventional fuels and LPG is the storage, as LPG is gaseous at room temperatures and atmospheric pressure. Thus a pressurized storage tanks are needed both in the fuelling stations and in vehicles.
Compared to natural gas, distribution of LPG is simpler and fuelling stations are significantly cheaper due to the fact that LPG is liquid already at moderate pressures. For fuelling stations, LPG is usually transported by tank trucks, which have a pressure less than 25 bar. In vehicles, fixed pressure tanks with pressure levels typically in the range of 5–15 bar are used (with the safety valve set to 25 bar). Due to pressure-proof structure, LPG tanks are somewhat more expensive, heavier and require more space than gasoline or diesel tanks.

The needed pressure is, however, only around one tenth of that of needed for compressed natural gas. The volumetric energy content of LPG is lower than that of gasoline or diesel (around 70% of that of diesel). In addition, the diesel process is also more efficient than the otto cycle. Therefore, the volume of LPG tanks in vehicles has to be about twice as big as those of diesel vehicles for covering the same travel distance.

Certification and emission requirements of LPG vehicles vary (Verbeek 2008). Fuel consumption and CO2 emissions are typically the same or little bit lower with the LPG fuel than with gasoline. Compared to diesel engines, LPG engine is 10–15% less efficient when it is operating at its optimal range. In practice the share of partial load is dominating, therefore "the real world" difference compared to diesel can be higher.

In a study by Tasic et al. (2011) emissions with gasoline and LPG were compared using a modern Opel Zafira with four cylinder 1800 cc Ecotec engine as the test vehicle. It had been converted with a Landi Renzo kit to run also with LPG. The results showed that the emissions were clearly lower with LPG than with gasoline. According to TNO's (Dutch Organization for Applied Scientific Research) measurements, regulated emissions of OEM equipped LPG vehicles are generally equivalent or lower than those of gasoline fuelled vehicles (Figure 2, Table 2, Verbeek et al. 2008). Diesel vehicles emitted lower CO, HC, NH3 and CO2 emissions compared to LPG, whereas other emissions from LPG vehicles were lower than for diesel. Particulate matter emissions of diesel vehicles were high when compared with LPG vehicles. Verbeek et al. (2008) studied also unregulated emissions with LPG vehicles (polyaromatic hydrocarbons, aldehydes and individual hydrocarbons). Overall, the human health effects were very low for LPG with a hot engine. LPG bi-fuel vehicles typically start with gasoline. Therefore during the cold start and warming up emission behavior of LPG vehicles resemble that of gasoline vehicles.(Hendriksen 2003, Verbeek 2008). 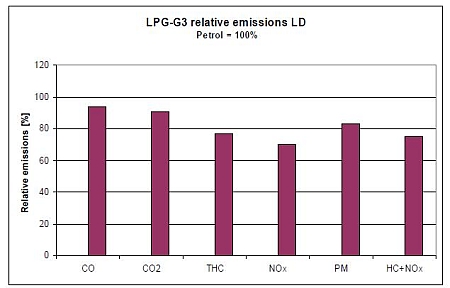 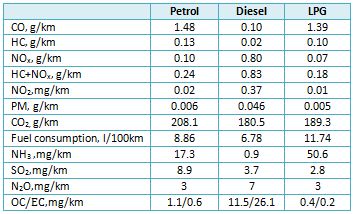 Aakko and Nylund (2003) studied different alternative fuels at normal, +5 and -7 °C temperatures. The LPG car in this study was a prototype. The LPG-powered car produced higher CO, HC and NOx emissions than gasoline powered cars (Figure 3). Compared to the diesel fuelled car, LPG showed lower NOx and particulate matter emissions. Formaldehyde emissions were higher for the LPG car than for the gasoline car, but at the same level as with diesel cars. CO, HC and individual hydrocarbon emissions increased substantially at low temperatures when compared to normal temperature, similar to gasoline cars. In the study by Nylund et al. (1996) The LPG car showed low emissions in all conditions when compared to gasoline and diesel cars at that time. 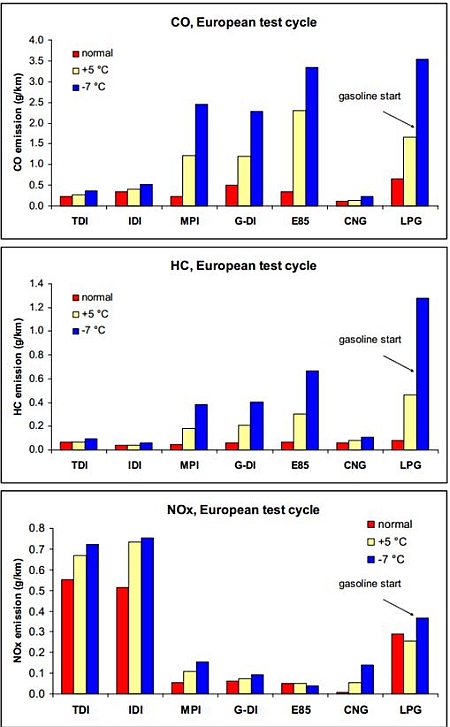