Dimethyl ether (DME) is considered as an alternative fuel for diesel engines. DME is used as aerosol propellant for example in deodorants, perfumes and air fresheners. DME is an excellent fuel for diesel combustion process, however, it is a gaseous fuel and requires a mild pressure to keep it in a liquid form. Fuel use of DME is not commercial today, but demonstrations are ongoing for example with Volvo trucks. In China, DME market for vehicles was 13 million tons in 2015. In Shanghai city, a field test of ten DME city buses has been running. In Japan, DME trucks have been running with business license plates and also other field studies with DME have been carried out. However, in general there is no large-scale supply and distribution system for DME as a transport fuel. (IEA-AMF Task 20, IEA-AMF Task 47, Volvo 2009, Hara et al. 2011).

DME can be produced from natural gas, coal or biomass by using gasification and a two-stage process via methanol, or by using Haldor-Topsoe’s single-stage process. For ships, an on-board convertion of methanol into a mixture of DME, methanol and water has been considered (Haldor-Topsoe’s OBATE concept). This would enable an easy onboard storage of alcohol and using ether in the diesel engine.

When produced from biomass, Well-to-Tank greenhouse gas emissions are low for DME. Greenhouse gas potential of DME is 1.2 at 20 years horizon and 0.3 at 100 years horizon. Economics for DME in large-scale plants are estimated to resemble those for CNG and LNG. Costs are estimated to be lower for fuel-grade DME containing small amounts of methanol and water than for chemical-grade DME. (IEA-AMF Task 14, Semelsberger et al. 2006, Haldor-Topsøe, Flesch 1995).

ISO has progressed standardization of DME fuel through TC28/SC4/WG13 since 2007. The DME standardization covers three categories: 1) home and industrial use, 2) blending with LPG and 3) fuel for diesel engines. A draft DME fuel specification ISO 16861:2015 is available for general DME use (Oguma 2018, IEA-AMF Task 47). The specifications for use of DME in vehicles are considered in the IEA-AMF Task 47. Properties and proposals for DME standards are presented in Table 1. Complete final requirements and standards are available from respective organizations. OBATE-M concept is not included in the Table. 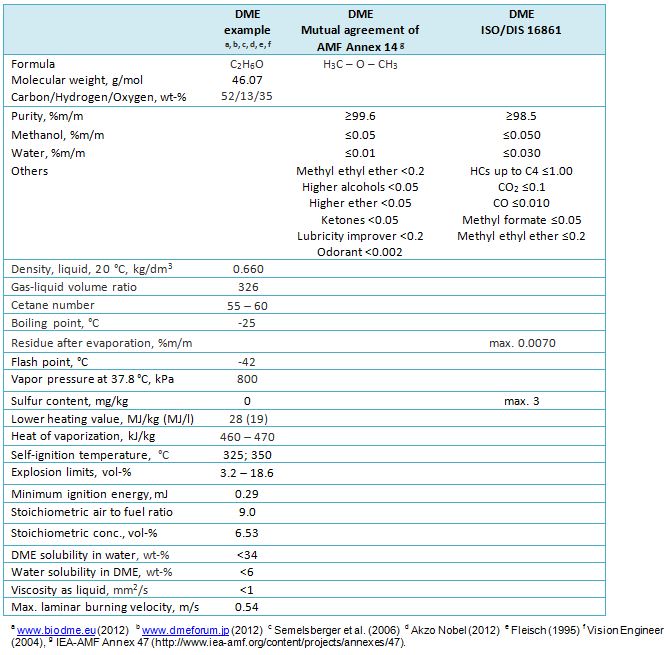 Lubricity improver additive and lubricity testing methods are discussion items in standardization of DME fuel for internal combustion engines (see “Engine” Chapter below). The ISO standard for DME use “does not deal with the possible additives necessary for specific end-use applications, for example, odorant typically added to heating fuel and lubricity improvers for DME used as replacement of diesel. Such additives are typically specified for the different end-use applications”. According to Oguma (2018, IEA-AMF Task 47), the test methods of lubricity will be “informative” in the DME fuel standards due to challenges in standardization of the special HFRR test methods for DME.

High cetane number of DME (55-60) makes it tempting fuel for diesel process. DME has been used as an ignition improver additive for methanol fuelled compression-ignition engines. DME is the lightest ether with a boiling point of only -25°C. It is a gaseous fuel at normal temperature and pressure, however, a mild pressure of approximately 6 bar is sufficient to keep it in liquid form. In this respect, DME resembles liquefied petroleum gas (LPG), which consists of propane and butane. Low viscosity and poor lubricity of DME is challenging for engine use. (Flesch et al. 1995, Karpuk et al. 1991). Vapour pressure of DME increases with increasing temperature, whereas liquid density decreases, respectively (Figure 1).

DME is polar, and consequently, miscible with water. Solubility of DME in water is up to 34 wt-%, and solubility of water in DME up to 6 wt-%. Alcohol can be used to avoid phase separation, for example, 6 wt-% of ethanol is sufficient to make all blends of DME and water to stay in a single, clear phase. DME is an excellent solvent. (Akzo Nobel 2012).

DME is not corrosive to metals in the same way as methanol, however, some elastomers are not compatible with DME. Similarly to LPG, DME is heavier than air, which may be a significant factor in some applications. DME is a flammable liquid forming explosive mixtures with air. DME burns with visible blue flame. It does not form peroxides as such or as aerosol. DME smells like ether, and therefore odorants are not required. (Semelsberger et al. 2006, Flesch 1995, Akzo Nobel 2012).

DME is compatible with efficient diesel combustion process. DME does not fit into LPG engine, which operates with otto-cycle. Totally different fuel injection system is required for DME than for diesel due to its gaseous nature. Mild pressure is needed to keep DME in liquid form. However, retrofitting of diesel engine for DME use is possible.

Low viscosity and lubricity of DME is challenging due to risk of leakage and wear in pumps and fuel injectors. Additives that are commonly used to improve lubricity of some diesel fuel grades, and also new additives, have been tested for DME. However, dozing levels of additives have been high. (Semelsberger et al. 2006, Sivebaek 2001). Special fuel injection systems have been studied for DME, such as wear-self compensation nozzle and independent lubrication nozzle (Zhang et al. 2012, Kapus and Ofner 1995). In early 2000’s, DME was not compatible with the most conventional gasket and seal materials, but promising elastomers have been found (Van der Ploeg and Verbeek 2002).

In the Common Rail system DME is injected as a liquid in combustion chamber at pressure of at least 12-30 bar to avoid premature vaporisation in pipelines. Risk for vaporisation can be reduced also by placing fuel pump into fuel tank. The target is to achieve same torque and power with DME as with diesel fuel. Dual-fuel engines and pilot injection using diesel and DME have been considered (Lim et al. 2010, Jung et al. 2011).
Costs of dedicated DME engine may be lower than those for diesel engine, because of less secure structure and lower fuel injection pressure needed. Energy density of DME is lower than that of diesel fuel. Therefore almost twice as large fuel tanks are needed for DME than for diesel to achieve the same driving distance.

Simple chemical structure of DME, as well as vaporisation and ignition properties, are beneficial for combustion in diesel engine. This combined with high oxygen content of DME leads to low particulate matter (PM) emission. Nitrogen oxide emissions (NOx) are not necessarily reduced with DME when compared with diesel engine. Noise level of DME engine is lower than that of diesel engine.

Fleisch et al. (1995) studied DME and two blends containing DME, methanol (3% and 10%) and water (3% and 10%). Fuel economy and performance of a Navistar 7.3 L V-8 engine were better or equal for DME than for diesel. Very low emission level was achieved with DME. Smokeless operation with DME enabled high EGR rates to reduce NOx emission. DME blended with methanol and water (fuel-grade DME) resulted in low smoke and NOx emissions, but elevated CO and HC emissions when compared with neat DME. (Fleisch et al. 1995). Kajitani et al. (1997) found almost negligible soot and HC emissions for DME. NOx emissions were at the same level for DME as for diesel fuel when injection timing was not delayed.

A prototype of heavy-duty DME truck was studied in the IEA-AMF Task 37 (Nylund and Koponen 2012). This was a 26 ton three-axle truck with power output of 440 hp. PM and particle number emissions were lower for a DME prototype truck than for a diesel bus, which was not equipped with a particulate filter. NOx, CO, HC and methane emissions were at the same level for a DME prototype truck as for a diesel bus. (Nylund&Koponen 2012).

IEA-AMF Task 14 “Investigation into the Feasibility of Dimethyl Ether as a Fuel in Diesel Engines”, 1997-1999.

Task 14
1997 – 1999: “Feasibility of DME as a Fuel in Diesel Engines”
electronically available reports